A successful partnership: VINCORION & SFC present prototype at German Defense Technology Association (DWT) expert forum in Bonn after two years of collaboration. Almost exactly two years ago to the day, at a DWT symposium, VINCORION and fuel cell specialist SFC Energy agreed on their first joint project. At the time, the stated goal was […]

Almost exactly two years ago to the day, at a DWT symposium, VINCORION and fuel cell specialist SFC Energy agreed on their first joint project. At the time, the stated goal was a robust and powerful energy system (VINCORION) with self-sufficient and portable methanol fuel cell (SFC).

The duo kept their word – and delivered. The Portable Power Management Modules, or PPM modularv for short, are the powerful result of their collaboration, and the companies are now showcasing them with a SFC methanol fuel cell. This is taking place in Bonn, of course, and once again at a DWT event that is currently being held in the former German capital. The product – a portable power supply for mobile emergency personnel – will be shown to the general public for the first time in the city on the Rhine. As a result, the two specialists are demonstrating exactly what they offer in compact form – operational readiness, flexibility, and mobility.

The PPM modularv, a mobile power system that can be configured to suit any application, was developed in less than two years thanks to its various portable modules: input, output, and storage. The three parts are flexible and can use – in addition to the fuel cell – any power source (AC/DC), such as available car batteries, old diesel generators, unstable local grids, or small solar power systems. Alternatively, the necessary independence can be achieved through the use of the system’s scalable storage modules. And the variable output module can be used to connect to a range of electrical consumers with a peak load of up to 10 kilowatts. This makes it suitable for particularly demanding missions ranging from disaster control to special military operations.

The PPM modularv is particularly effective in hybrid operation with the modern SFC fuel cell. The field-proven methanol fuel cell generates 12 kW of electrical power per day and emits hardly any noise, no harmful exhaust gases, and hardly any heat. The decisive advantage is the self-sufficient energy supply based on SFC methanol fuel cartridges. Depending on the size of the SFC fuel cartridges, which have a NATO supply number for years, forces can work independently for days.

Professor Karsten Pinkwart describes the problem of supplying power during times of crisis or in conflict regions as follows: “How can we set up a resilient energy supply? How can we further split up our energy supply? For example, what we are experiencing today with the war in Ukraine.” Pinkwart conducts research at the Fraunhofer Institute for Chemical Technology on batteries and fuel cells, among other topics, and advises the Federal Government and the Bundeswehr in various committees. The scientist thinks further: « What will the energy supply of my energy systems look like in the future? »

To this end, there is apparently a good guiding radar on the Rhine, because at the time of the announcement of the partnership, the DWT still named its symposium “Future Energy Supply.” Today, in the midst of Germany’s Zeitenwende (i.e., the government ushering in a new era in the defense sector), the conference is named “Sustainable Energy Sources for Military Mobility and Infrastructure.” And that is why the partners are appearing side by side at the DWT event. They have taken a first step into the future. The PPM modularv is their business card. And a particularly sustainable contribution. Both companies – VINCORION and SFC Energy – are ready to actively shape the energy transition, even beyond the scope of their current partnership. 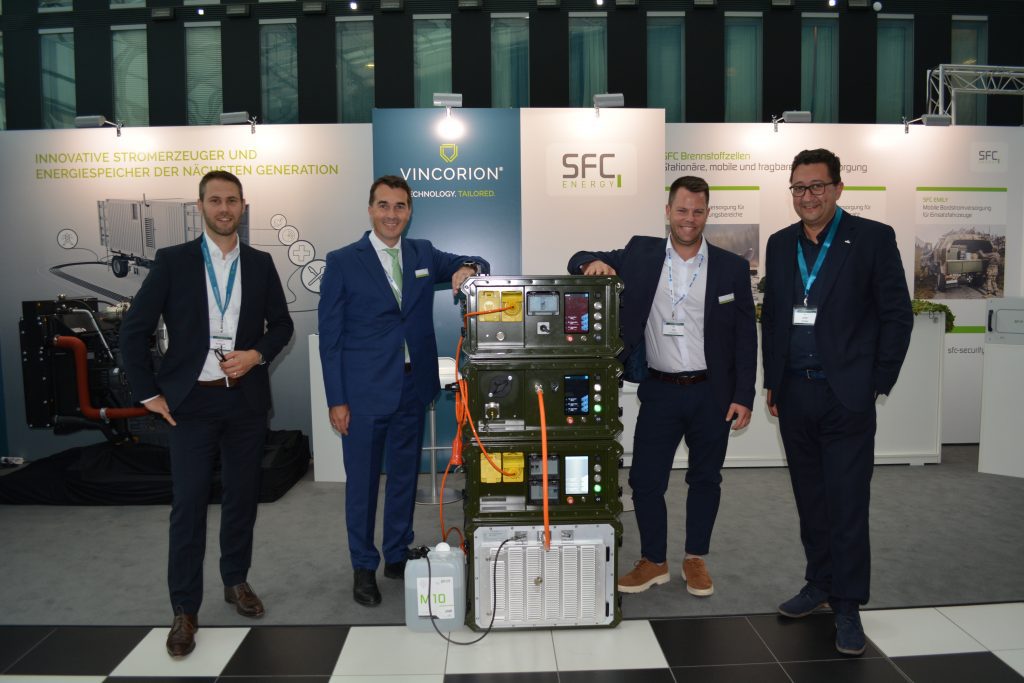 VINCORION is a technology company that specializes in innovative power systems for safety-critical applications, including generators, electric motors, and drives, gensets, power electronics, and hybrid power systems.
As a partner to the civil aviation, security and defense, and rail industries, VINCORION develops and manufactures solutions tailored to its customers’ specific requirements on the basis of an in-depth dialog. A high-performance customer support team provides assistance and service to users of the company’s own products and those from third parties throughout the entire product life cycle.
With approximately 700 employees at sites in Germany, and the United States, VINCORION generated revenues of approximately 145 million euros in 2021.
For more information, visit our website www.vincorion.com sowie auf Twitter und LinkedIn.