×
Vincorion > Perspectives, Presse > Which Missile Defense Systems Exist and What They Can Do

Which Missile Defense Systems Exist and What They Can Do

The protection of major cities and settlements, energy plants, or infrastructure against threats from the air is the subject of controversial debate. Especially since the intensified Russian missile attacks on Ukraine, the question of what defense systems can do—and which ones are deployed in Germany—has become pressing. On the fringes of the meeting of NATO defense ministers in Brussels, 14 European countries and Germany have just signed the “Letter of Intent” to establish a European Sky Shield Initiative (ESSI) for air defense—because Germany has some catching up to do in defending itself against threats from the air and space. The technology company VINCORION from Wedel near Hamburg, itself a supplier of power for defense systems, provides an overview.

These Systems Are in Use in NATO

“An effective protective shield consists of several systems that build on each other, are linked, and span like a dome,” explains Dr. Stefan Stenzel, managing director of VINCORION. The best-known defense system is “Patriot” from the manufacturer Raytheon, which has been on the market since the 1980s and is constantly being further developed. The current version is “Patriot PAC-3 MSE.” The Patriot guided missile can engage up to five targets simultaneously, such as ballistic missiles, which it hits directly. There are versions with different ranges available. As Patriot is continuously improved, it will be in service beyond 2040.
“Energy supply plays a major role in the modernization and adaptation to current defense scenarios, as more and more powerful components are being used,” says Stefan Stenzel. “This is the case, for example, in the design of new radars such as the LTAMDS radar, or in the formation of entire protective shields, which are also expected to grow further and be interconnectable via plug-and-fight functionality.” At the same time, he said, resource-saving components are also required, in terms of emissions, but also fuel consumption, and thus deployment costs.
Another system is the U.S. “THAAD” (“Terminal High Altitude Area Defense”), which is deployed at the medium range of around 200 kilometers, by the U.S. and the United Arab Emirates. This system can stop missiles in the final phase of their flight.
The new “IRIS-T SLM” system from Germany has been hitting the headlines, as a first example of this system has just been delivered to Ukraine. So far, it has only been deployed in a few countries; it is likely, that the German Bundeswehr will be supplied with it. But the missiles it works with are proven, being based on a development for the Eurofighter. “IRIS-T” can engage jets, helicopters, short-range missiles, drones, and guided missiles with a range of up to 40 kilometers.
For the outer part of the protective shields, which build up like domes, Germany plans to acquire the Israeli “Arrow 3” system, which can intercept long- and medium-range missiles. Development began with the “Arrow” in 1986 in Israel with U.S. participation. The new “Arrow 3” is considered to be very flexible; enemy missiles are to be destroyed by direct hits. The protective shield of the new “European Sky Shield Initiative” could consist of three systems: “IRIS-T”, “Patriot,” and “Arrow 3.”
France and Italy manufacture the “SAMP/T” system, which has been operational since 2002. The defense system can be equipped with different missiles, which reach a range between 30 kilometers[AG1] (“Aster 15”) and up to 120 kilometers (“Aster 30”). The missiles are smaller than those of the “Patriot” system.
The U.S. now supplies the “NASAMS” system to Ukraine, which is built in Norway and the U.S. It can be coupled with “Patriot”, which is intended for the longer ranges. Currently, the “NASAMS 3” system reaches a range of up to 50 kilometers. In Europe, this system is used as a protective shield, for example, by Lithuania and the Netherlands.

The Israeli industry is also a leader, producing “David’s Sling” (up to 160 kilometers) and the “Iron Dome” (up to 17 kilometers), for example, which are two very advanced defense systems. However, they are not supplied to Ukraine.
On the Russian side, the S-300 and S-400 systems are in use, whose hit rates have performed less well in NATO studies than the Patriot system. Ukraine has the S-300 and achieved intercept rates of up to 50 percent with it in recent missile attacks. It has a range of 75 to 100 kilometers.
In the meantime, Germany planned to develop another system, the “TVLS,” which was based on the “MEADS” project. In 2020, however, the Bundestag passed a resolution halting further development. Other countries that develop and manufacture protective shields are India and China, as well as Taiwan.

How Does a Modern Defense System Work?

A radar looks at the airspace over a given area. It can perform friend/foe detection, which is interpreted. All aircraft are detected, because it not only concerns airplanes, but also missiles and larger drones. If the radar detects enemy contact, the defensive missile is launched. In cooperation with the radar, the missile can also be retargeted until it finally hits the flying object and renders it harmless.
A secure energy supply is essential at all times: VINCORION supplies the energy for the radar system and Patriot’s missile launcher and IRIS-T’s launcher. “What makes it special is the system’s load profile,” explains Stefan Stenzel. Over the course of the mission, he says, there are always special loads for which energy must be provided. Hybrid systems can be significantly more efficient because they allow operation on the grid when a system is stationary. “The challenge is to always provide as much energy as is needed – also an important undertaking from an environmental perspective,” says Stefan Stenzel.
Patriot is transportable, but future systems will also be housed in containers. The modules will have a standard 20-foot transport interface to the carrier vehicle—making logistics easier and the units readily deployable.
“IRIS-T,” for example, consists of three parts: the radar system, command post and missile launcher mounted on trucks. Multiple systems can be coupled to form a more effective protective shield.

What Can Help Ukraine?

Indeed, the IRIS-T equipment seems to be very helpful for Ukraine in the war with Russia. Initially, the first “IRIS-T” has been delivered, and three more are to be added in the course of 2023. However, it is still unclear whether Ukraine will get a “Patriot” system. The Kyiv government has been promoting the delivery of such a system to the U.S.
One unit of the “NASAMS-3” system has been delivered from the U.S., with up to seven more to follow. Concerns about a missile shield falling into Russia’s hands may also play a role in some systems, according to some experts. So far, France and Italy have refused to deliver their systems. However, movement has come into play there: France wants to deliver a system in principle, but is still holding back on details.
However, the systems that will be delivered to Ukraine, be it “IRIS-T” or “NASAMS,” have yet to be produced. Resource-saving components are required for production and operation, not only in terms of emissions, but also in terms of fuel consumption and operating costs. VINCORION benefits from its experience with mobile, hybrid power supply units, such as those it will supply to the German armed forces in the new power generation units SEA. 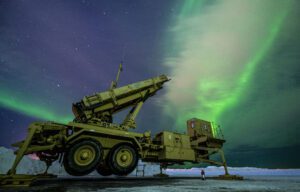 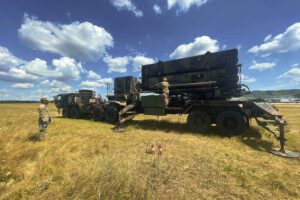 Soldiers prepare a Patriot missile battery as part of an evaluation in Slovakia.
Credit: US Department of Defense, Army 2nd Lt. Emily Park. 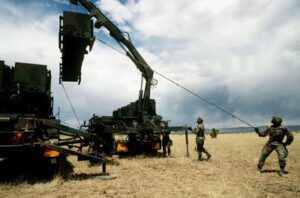 Soldiers from the 31st Air Defense Artillery Brigade load a Patriot missile onto a transfer vehicle at McGregor Test Range, N.M / Credit: US Department of Defense 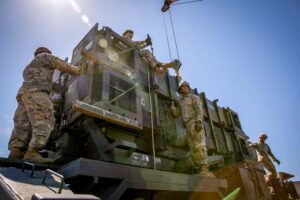 Soldiers torque down and complete the setup of a Patriot launching station at a Croatian air force base in Zadar, Croatia. Quelle: Department of Defense / Army Sgt. Joshua Oh

VINCORION is a technology company that specializes in innovative power systems for safety-critical applications, including generators, electric motors, and drives, gensets, power electronics, and hybrid power systems.
As a partner to the civil aviation, security and defense, and rail industries, VINCORION develops and manufactures solutions tailored to its customers’ specific requirements on the basis of an in-depth dialog. A high-performance customer support team provides assistance and service to users of the company’s own products and those from third parties throughout the entire product life cycle.
With approximately 700 employees at sites in Germany, and the United States, VINCORION generated revenues of approximately 145 million euros in 2021.
For more information, visit our website www.vincorion.com sowie auf Twitter und LinkedIn.